Are biometric payments the future?

It’s safe to say it’s been quite an amazing few years for all things card related, from the rise of contactless, to even being able to pay with smart wearable devices. And there is no doubt that card payments will continue to become easier and more intuitive. But, what’s next?

What exactly are biometric payments?

In the simplest terms, it’s approving a card payment via your fingerprint.

You may already be used to using your fingerprint to approve things on your smartphone. In fact, it’s really common to be asked for your fingerprint rather than a password for many applications.

And now a similar kind of technology is beginning to be trialed for card payments over the £30 contactless limit. So instead of having to enter a chip and PIN code to confirm a payment, you will be asked to place your fingerprint onto your card when you tap it onto a card machine.

One of the largest banks in the UK, Natwest, have been piloting their own biometric system are currently using 200 customers to test it out. We’re sure other card providers will follow if they’re not already doing so.

In fact, a co-working space in Manchester have also announced that they plan to for consumers to start being able to make transactions for food and drink using biometric payments later this year. And it’s already proved successful at the Manchester City’s Etihad Stadium.

The benefits of biometric payments

So, what are the benefits for consumers using this type of payment method?

Telephone banking, debit and credit cards, social media apps and the rest! It seems all of our favorite things require us to remember a password or PIN code. And many of us will create the same, or similar for each application - a dream for savvy hackers.

A biometric credit card will work with existing payment terminals and no modification is required for existing Point of Sale devices either. This means there are no rollout costs for the merchants and this technology can become accepted quickly.

With biometric payments, if your card was stolen, then the thief wouldn’t be able to make a payment over £30, as they’d need your fingerprint to approve it.

Fingerprint authenticity accuracy is said to be able to exceed 99.99 percent, making it super secure. The technology also safeguards against duplicated 2D and fake rubber fingerprints as it’s dependent on electrical sensing, which it can only get from a real finger!

Another added benefit to both the consumer and retailer is the speed of payment. Just as contactless has done with small payments under £30, the time it takes to make a payment has sped right up, helping to reduce queuing times. It’s an easy tap and go payment.

If biometric payments do become commonplace, this should do the same for larger payments. 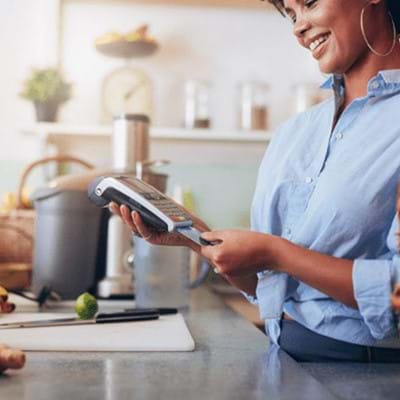 Payment processing solutions: Everything you need to know

Find out everything you need to know about payment processing solutions.

The future of payments - things to watch out for

The future of card payments is exciting. Here's 4 things you need to watch out for.